PRAYER ROPES/BEADS AND “THE JESUS PRAYER”

St Paul in his Epistle to the Thessalonians admonishes us to “pray without ceasing.”Many Eastern Church Fathers, including St John Chrysostom, St Isaac the Syrian, St Seraphim of Sarov, and St John of Kronstadt , all urge repeating the Jesus Prayer:“Lord Jesus Christ, Son of God, have mercy on me a sinner!”The prayer provides for inner peace and allows one to draw nearer to God.

Prayer ropes/beads in Greek are called “kombioskini;” while in Slavic countries they are called “chotki.”Tradition says that monks used to gather and move small pebbles to count their prayers.An enterprising monk decided to tie knots in a rope so that he could say his prayer wherever he went.His invention did not work because the devil would un-tie the knots until an angel taught him to make the knot with interlocking crosses.The devil could not undue the Cross!

Prayer ropes come in different bead or knot numbers.Many of the numbers are associated with an event in the church, for example, 33 for the years of Christ’s life.Fifty is associated with the number of days between Pascha and Pentecost.One Hundred days from the beginning of the Great Fast until Pentecost.Sometimes the knots are referred to as “Tears of the Mother of God.”

Recommend Reading:THE WAY OF THE PILGRIM 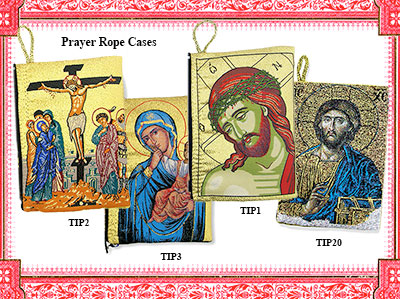