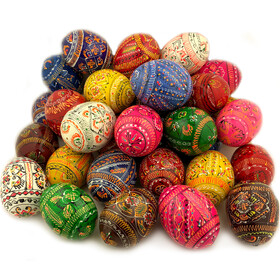 PICTURE SHOWS ASSORTMENT OF COLORS - PRICE IS FOR 8 EGGS, ALL 8 EGGS WILL BE ASSORTED COLORS

Made In the Ukranain Assorted colors and folk designs.