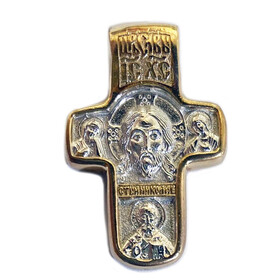 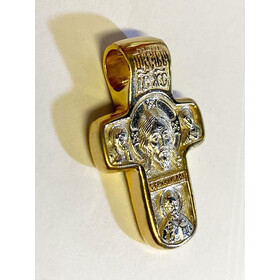 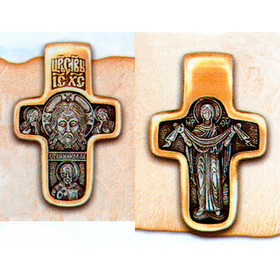 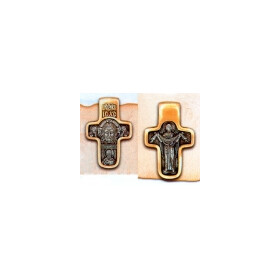 BAIL - on the bail (where the chain goes) in the form of a cross is IC XC  NI KA the Greek letters for Jesus Christ Conquers.

CROSS BAR  a representation of the Diesis - by tradition a representation of the Christ with the Virgin Mary on His right and St John the Baptist on his left. The center in this Diesis is the face of Christ in the East known as Made Without Hands (by tradition King Agbar of Syria asked Christ to come and heal him  instead Christ wiped his face on a towel and sent it to the king by which he was healed  King Agbar was one of the earliest Christians. In the West it is known as Veronicas Veil (by tradition on his way to Calvary Christ was greeted by some woman during which Veronica offered Christ a towel on which he wiped his face and on which his facial image was left. To Christs right is His Mother whose right hand is pointing to Christ (in Greek this is known as the Hedgitera) as the Way. St John the Baptist  the Forerunner of Christ is to His left.

LOWER PORTION OF CROSS - a representation of St Nicholas, the 4th Century bishop of Myra and patron Saint of Russia. This holy bishop is the patron of children, sailors, travelers, jewelers and pawn brokers. There is a Russian folk saying that when God becomes old and tired and he does not want to rule the world he will turn the ruling of the world to St Nicholas. Russians have great devotion of their Holy Father Nicholas.

VERSO OF CROSS  a representation of the Virgin of Procrov (Protection)." By tradition both the Cities of Constantinople (from the Turks) and Kiev (from the Hordes) were protected from a hostile attacked by the Virgin who appeared over the city holding her veil in protection.