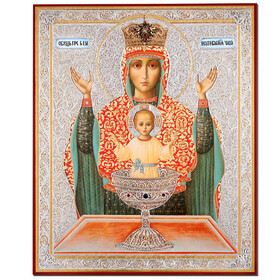 A peasant from the Efremovskii district of Tula province, was a retired soldier a drunkard and alcoholic. The man having hit rock-bottom had paralysis and could not walk. A Holy Man appeared to him in a dream and told him to go to the Monastery of Our Lady Queen of Heaven in the town of Serpukhov where you will find an icon of Our Lady of the Inexhaustible Cup. He had no money and no one to help him go to the Monastery. The Holy Man again appeared to him two other times commanding him to craw on all fours. He followed the Holy Man’s bidding. On his way a kind lady gave him shelter and messaged his legs. After this he was able to continue his journey with the help of others.

When he told them at the Monastery of his dream, no one knew of this icon. He insisted and it was suggested there was an icon of the Virgin seated in a cup hanging in the hallway from the vestry to the cathedral. No one knew how the Cathedral had this icon. To their surprise, they found the inscription “Our Lady of the Inexhaustible Cup” on the verso of the icon. They immediately celebrated a service supplicating the Virgin to intercede for the man who was made cured of illnesses and freed from his passion for alcohol.

The news of this miracle spread throughout Russia and people sought the aid of the Virgin for themselves and their loved ones suffering from alcoholism. Many copies of the icon were made throughout Russia. Many of these icons became miracle working icons. One of these icons is at the Danielov Monastery (the home of the Russian Patriarch) in Moscow.

The icon itself is an ancient form of the “Orante” (also known as “Orans”) Virgin in the gesture of “Praying.” The use of the chalice reflects on Christ in the mystery of the Eucharist. Christ is the lamb that “is forever eaten yet never consumed.” The Virgin in her role in the Incarnation feeds humanity with Heavenly Bread. The Fathers of the First Ecumenical Council decreed singing “Your Womb became a Heavenly Table, bearing Holy Bread – Christ our God.”

Today the Virgin is supplicated for those suffering (including the addict and or those who love, interact or are affected by them) from alcoholism and drug addiction. The Virgin as manifested through the Icon of the Inexhaustible Cup has gained acceptance throughout the Orthodox world and in the United States. This icon is used by some alcohol support groups.

Through the Mother of God spiritual joy, consolation, help and charity is waiting for those in need!

Hook on the back side for hanging is included